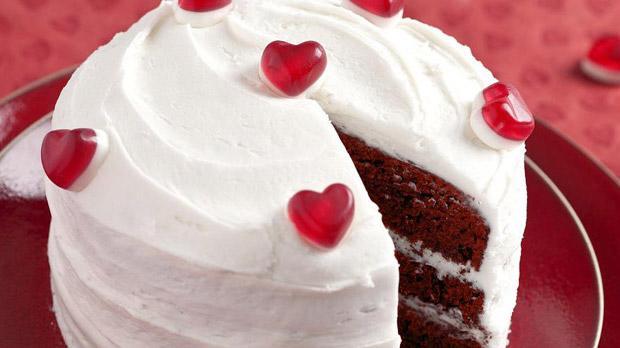 This much-loved cake, with its fine crumb, deep red colour and dazzling white icing, has a history as rich and intriguing as its flavour. We thought we’d give you a glimpse into the background of this luxurious confection, as well as a few recipes and ideas for you to try a new spin on the old classic formula.

There are many legends surrounding the invention of red velvet cake, with one common one being that is was first created in the kitchens of New York’s Waldorf Astoria hotel. Other attempts to explain the red cake’s inception include the use of boiled beets by bakers affected by rationing during WWII to enhance the colour of their cakes, which, although it did occur, is not traced back to the early history of the cake.

Another story surrounding the cake is that the Canadian department store Eaton’s was responsible for its creation, as it was a popular choice in the retail chain’s bakeries and restaurants in the 1940s and 1950s. Although the company promoted the cake by saying the recipe was a closely guarded secret, the cake’s deepest roots appear to be traced more accurately back to the culinary traditions of the US’s southern states.

One of the earliest mentions of a ‘velvet cake’ is inDr. Chase’s Family Physician, Farrier, Bee-Keeper, And Second Receipt Book, first published in 1873. The author describes the fashion at the time of giving “nice and smooth” names to things – hence, velvet cake and velvet cream.

The addition of ‘red’ could be from another tendency at the time to describe cakes made using brown sugar, (then known as red sugar), as Red Devil’s Food. Another possibility is that because the natural pigment of cocoa takes on a reddish hue when mixed with acidic substances such as vinegar or buttermilk, both of which may well have been included in early chocolate velvet cake recipes.

The notoriety of red velvet cake was given a huge boost during the Great Depression, when the Adams Extract Company began advertising its products using an image of the reddest red velvet cake ever created. It began giving away recipes with purchases of its red food colouring, now added to the mix, and in the harsh economic climate the popularity of the extravagant cake soared, and has never diminished!

Your Place in History

Click here for our classic recipe decorated with jelly hearts and white vanilla frosting, or here for our red velvet rainbow heart cake, decorated unusually with ready to roll icing. If you feel like adding your own flourish to the rich traditions of the red velvet cake this Valentine’s, why not try any combination of layered cream cheese, chocolate, or cinnamon frosting, perhaps with red berries for decoration, or even a Cupid’s Arrow piercing a heart-shaped cake… whatever you choose, do it with love and have a very happy Valentine’s Day!