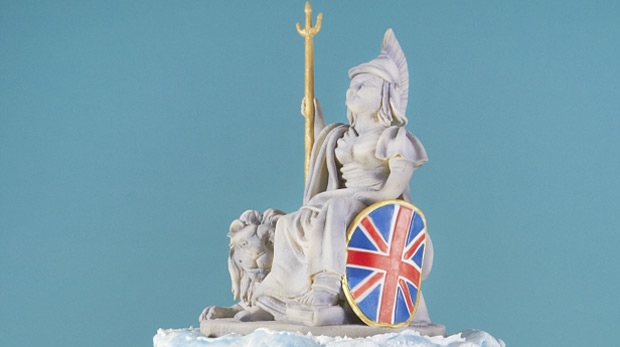 Renshaw were honoured to sponsor the Celebration Cake Business of the Year Award for the 10th consecutive year. This year entrants were challenged to showcase their expertise and creativity with sugar paste and marzipan in a ‘Best of British’ theme.

Amongst the judges for this award was last year’s winner Terry Tang (Terry Tang Designer Cakes) who excelled with the theme ‘Around the World’.

The finalists for the award were Brown’s Handcrafted Cakes, Shuga Budz, and Slattery Ltd.

Slattery, based in the North West, is well known for being a Patissier and Chocolatier, but they also create some amazing looking cakes. Their cake was topped by an impressive marzipan Britannia, and the whole cake rested on a giant sugar paste pound coin. Intricately modelled daffodils and roses surround the cake, and there is a good balance of representation of different parts of Britain.

Amelia Mason and five other members of the Shuga Budz team worked on their cake, which featured beautifully painted flowers, a delicate lace edging, and a dainty sugar paste afternoon tea topper. Shuga Budz, who are based in Wolverhampton, covered the Great British Seaside all the way to the Loch Ness monster in their piece.

Browns Cakes, based in Rochdale, impressed the judges with their towering piece which included a dramatic tea pouring feature from top to bottom of the cake! Natasha Brown and two of her colleagues created a cake with plenty of references to popular culture including Del Boy from Only Fools and Horses, the Tardis from Doctor Who, and the Rover’s Return from Coronation Street.