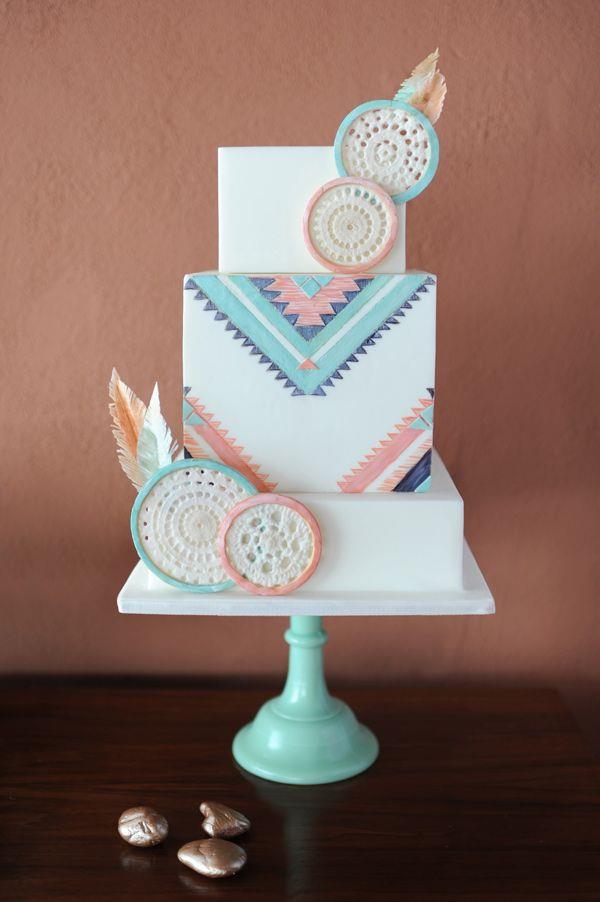 Indigenous tribal cultures across the globe often have strongly identifiable aesthetics, from their clothing and jewellery to arts and crafts. Often characterised by bold shapes and striking colours, tribal cultures can provide inspiration to make stunning cakes.

We’ve scoured the web and found five examples of tribal cakes to help inspire you to conjure up something special for your next project.

This beautiful cake was created for a Native American themed wedding by the Just A Little Dessert Co. and uses a combination of iconic shapes and colours to conjure the spirit of the Navajo and the Sioux.

Ready to roll icing chevrons and triangles are simple to make and an easy way to get that tribal theme into a cake. The braided brown icing border, made to mimic a simple leather braid, is an understated touch.

Dreamcatchers are one of the most widely identifiable items of Native American culture, and are now so commonplace you’ll find kits for making them in children’s toy shops.

This cake by Avalon Cakes uses expertly crafted dreamcatchers as a decorative flourish, much the same as flowers or butterflies. Using flower paste would be your best bet here, to maintain the delicate structure and ensure your dreamcatchers don’t break. The feathers are also icing, and you can find out how to make icing feathers in our handy guide.

African tribes use strong primary colours in their clothes and art, which lends itself well to making an eye-catching cake. Although much of the decoration on this cake from Visions Cakes is painted onto a band around the cake, you could quite easily mimic it using different colours of ready to roll icing.

Creating the pot topper that adorns the cake might be trickier than you think, and we’d recommend using either flower paste or a 50/50 mix with ready to roll icing to ensure the structure of the bowl doesn’t warp or break. Making and fixing into place all the icing beads and buttons will be time consuming work, but well worth the effort.

We’re back to Native American-inspired cakes with this wonderful example of sugarcrafting from Kavarna Orbis.

The tipi is so detailed, with the faux leather stitches that join the outer together and the way the door is flapping open as if caught in a breeze rushing across the plains. The fringing made with brown icing is easy to achieve and the sense of movement gives it an extra lift.

Amy at De La Rosa Cupcakes used the arid beauty of the Pinnacles Desert of Australia as her inspiration for this cake. Taking cues from Aboriginal artwork she’s used a combination of earthy colours and simple images to create a cake that really evokes Aboriginal Australia in all its wonder.

Have you tried incorporating elements of tribal designs into your cakes? If so we’d love to see them. Be sure to share them with us on social media.