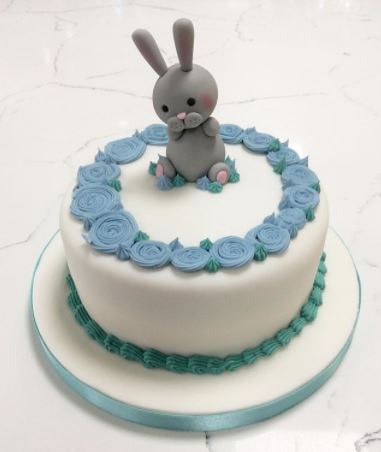 Royal baby fever is hitting the nation once again as the announcement of the Duke and Duchess of Cambridge expecting their third baby is creating headlines. Here at Renshaw Baking we thought that we would give you the cake low down when it comes to baby shower cakes and inspire you for the next few months of baby fever!

The gender reveal cakes are a trend that came across the pond from America. The idea is that the cake will look on the outside non-gender themed but when you cut into the cake the sponge or the frosting inside will either be pink for a girl or blue for a boy. The reaction to the big reveal is often filmed and videoed for a keepsake. We love this gender reveal cake by Sugar Geek Show, the use of classic gold and white on the outside of the cake gives it a wonderful touch of elegance.

There has recently been a rise in more realistic baby shower cakes. Instead of the cute booties, bows and ribbons, some cake artists have instead chosen to create a baby changing bag themed cake. This modern twist on the baby shower cake design makes a unique cake symbolising some of what is to come for expectant parents. This creation here is by Molly Robbins of Molly’s Creative Cakes and she has handcrafted a range of baby products to create the whole design.

With retailers releasing gender neutral lines of baby clothes, many parents are letting their children choose what they like and not defining gender by colour. Gender neutral cakes are great if you just want to keep things less defined at your baby shower or if you don’t want to know the sex and want to keep it as a surprise for the birth. The use of other colours such as pastel yellow and grey are popular and still keep the tone baby themed. However you can still use the traditional pastel blue and pink theme but instead of choosing one or the other use them together in tandem. Tastefully Yours Cake Art have created these amazing gender-neutral designs which use both of these techniques.

For years modelled animals have been one of the most popular baby shower cake designs, and they still are. Cute giraffes to elephants, even adorable teddy bears (though I’m not sure you could call them an animal). These modelled designs provide the perfect cake toppers to a varying range of cakes. If you would like to have a go at creating your own cake toppers check out this article by Renshaw’s own Emma Chamberlain who talks you through the basics of modelling.

The left and right-hand cakes above are from City Cakes, both featuring animals as their centre piece. The cute bunny rabbit cake is by the talented Francezka Bell at the Renshaw Academy. All the animals however are almost cartoonish, giving it that childlike edge to the design.

If you would like some more practical design ideas for an upcoming baby shower cake then check out this article for some cute inspiration.

Now that we have given you the Renshaw low down on baby shower trends we only need to wait a few months to find out whether we have a new Prince or Princess! Until then, stay tuned on our Facebook, Twitter and Instagram pages for more baking inspiration.

Emma Chamberlain shows you how to make figure modelling easy.

With the royal baby imminent what better time to explore creative ways to celebrate the arrival of a new baby with cakes.

With over a staggering 8.5 million of us owning a dog in the UK, it’s safe to say that man’s best friend has a place in our hearts. From Pugs and Bulldogs to Dalmatians and Collies, whatever shape, size or breed, we all have our favourites. Since it’s National Dog Day we’re combining our love […]

How to use ready to roll icing

Ready to roll icing is fun and easy to use. We’ve put together some of our favourite cake decorating tips and fun ways to use this versatile product.

How to Decorate a Cake with Fondant Icing

Fondant icing is actually the same thing as sugar paste. It can be bought as plain white icing, or you can colour it yourself with a gel colourant.

National Teddy Bear Day is the perfect excuse to get nostalgic and to of course celebrate with teddy bear inspired bakes.

3 Simple Ways To Create A Knitted Effect For Your Cakes

Make cakes your gran would be proud of with these 3 techniques to make a knitted effect with Ready to Roll Icing.

With spring finally here we’re in the mood for some animal cakes. Easter is just around the corner, and with it plenty of Easter bunny, lamb and birdie cakes, so to get you in the mood here’s a rundown of 10 animal-inspired cakes.