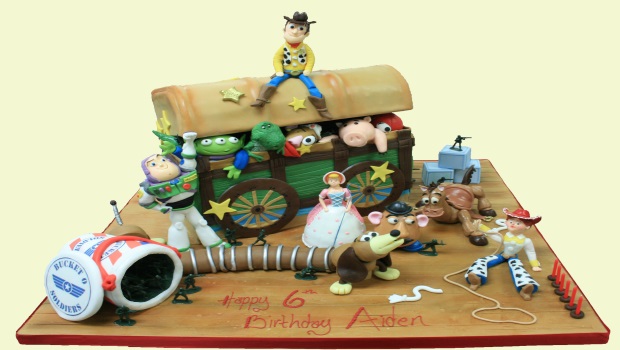 This time in two days, the glitz and glamour of the British Baker Baking Industry Awards will be over for another year, with a new host of hot baking talent celebrated for their achievements and professionalism in everything from craft bakery to speciality bread product of the year.

This year, Renshaw are sponsoring Celebration Cake Business of the Year, so we caught up with the three finalists ahead of tomorrow’s week’s ceremony to get the low down on the talented bunch of cake decorator’s businesses.

This renowned family-run Liverpool bakery started life back in 1995, headed up by the award-winning Terry Tang, started life when Terry stepped in to take over the creation of his daughter’s first birthday cake. Subsequent birthday creations and being made redundant from the building trade saw Terry invest further in his skills, joining the British Sugarcraft Guild and winning Gold in his first ever competition, leading to the set-up of a cake decorating crack team including Carol and Terry’s talented daughter Leanne.

With both father and daughter having won Celebration Cake Maker of the Year titles at previous Baking Industry Awards, and numerous accolades at Cake International, this year’s entry (to be revealed next week) is one of their proudest creations, though the most challenging and rewarding customer brief came courtesy of Leanne, whose 7-tier wedding cake, comprising 14 cakes and standing over 12 feet high came with the most expectation (and structural support).

Taking inspiration from popular culture and current cake trends, as well as the joy of taking and creating something inspiring out of the simplest of customer briefs, next week’s Celebration Cake Business of the Year reveal promises to be a show stopping one.

Renowned chocolate emporium of the North West, Slattery’s also do a star turn in celebration cakes, with the team behind this year’s Celebration Cake Business of the Year headed up by Sarah Barnes, the granddaughter of Bernard and Margaret Slattery, who started the business over 40 years ago. Joining the business to take advantage of her arts background upon the set-up of the cake decorating side of Slattery, Sarah has been working in the business for over nine years.

Taking customer briefs as their main source of inspiration, Slattery do a fine turn in bespoke themed occasion cakes, with Sarah particularly enjoying the making of customer caricatures and bringing each individual’s personality to life through the model or cake created. Their biggest challenge to date came from Manchester’s St Patricks Day Society, who required an Irish themed cake that came in at over 15 foot high and 6 foot wide, taking over six men and seven hours to build.

Fresh out of catering college and into a local bakery, Michael created his first celebration cake back in 1986 for Valentine’s Day, a simple heart-shaped cake decorated with 12 iced roses. A passion for cake decorating, compounded with a two year evening course at Northampton College saw Michael creating his own cakes for friends, family and eventually paying clients from home, leading to the Hockleys business being established finally in 1990, now complete with a well-stocked wedding cake studio.

Offering all contemporary and modern sugar craft techniques, Hockleys design and decorate for all celebration cake occasions, working closely with clients to draw and design cakes before the cakes are created, though novelty wedding cakes are a firm favourite of the business, due to the originality and workmanship they inspire and require. A surprise novelty ‘Finding Nemo’ themed wedding cake, created back in 2003, has proved a particular favourite of Michael and his brother Graham, who also works in the business.

Having received commendations for previous entries to the Baking Industry Award Celebration Cake Maker of the Year awards, and a win in 2002, Hockley’s cake promises to be a creative one.