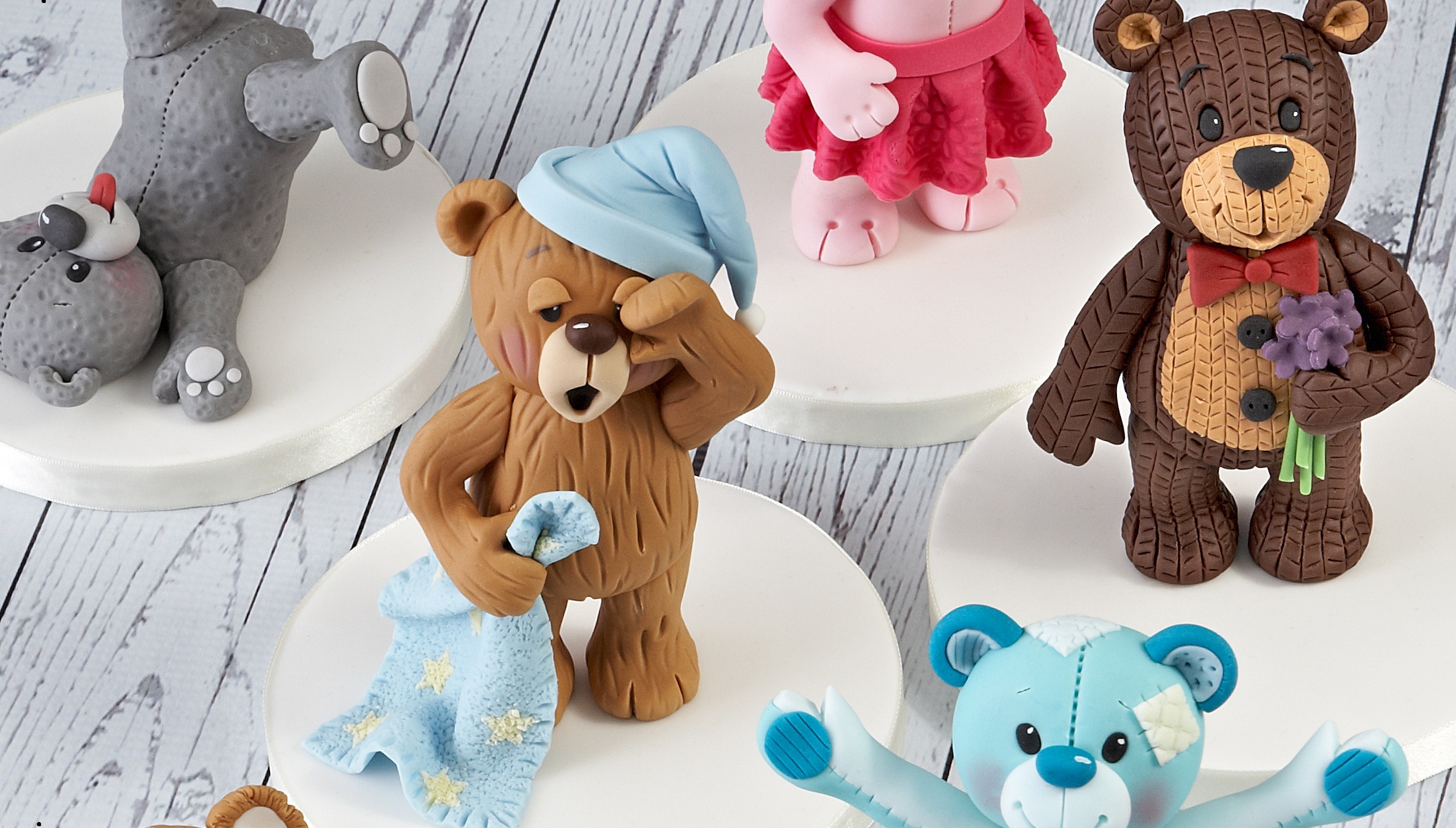 We’re taking a closer look at how to create textures and detail in your modelling with Ready to Roll Icing, based on the cutest bears that we’ve ever seen! Thank you to Leanne Tang of award-winning Terry Tang Designer Cakes for making these adorable bears.

Our colourful bear cake toppers where made using Renshaw Ready to Roll Icing, and they display a number of texture creating techniques that we think are going to be really popular this year. But first let’s introduce the bears to you…

Three of our bears (Harry, Amelia and Jake) show how you create a fur effect with your Ready to Roll Icing in a simple way. The fur effect on Harry the grey bear was created by gently stippling the Icing to create a soft texture. You can create this effect by using a clean nail or toothbrush or toothpick. Use a modelling tool with a small rounded point to create a softer stippling look like our grey bear.

Another fur effect that has been used on Jake and Amelia is carving small fur-like lines into the Icing. Depending on how you want your bear to look you can use slightly deeper and longer cuts for a smoother fur effect, like on Jake. Or create smaller line carvings that are closer together to give the effect of fluffier fur, like on Amelia.

If you’re not sure how to take on the knitting trend, George the bear is a great example of how to achieve this effect with little fuss. By carving equally spaced lines vertically into your Ready to Roll Icing and then cutting slightly upwards in alternating directions in between the vertical lines, again equally spaced, you can create the effect of wool without having to wrap strips of Icing together to do this. This is an easier way of making your models looking as though they’ve been knitted but looks just as effective. The two colours on George the bear, Chocolate Brown and Teddy Bear Brown Ready to Roll Icing, are modelled together seamlessly by having the knitted lines matching up between the colours.

Get creative with embossing

We’ve also got embossing on our bears; Ava’s ballerina skirt and bow, and Paulie’s patches, paws and ears. Embossing can be created with imprinted rollers which are great if you want to create texture on larger pieces of Icing, like Ava’s matching skirt and bow, and you can cut small squares out of this if you want to recreate the patchwork effect. Some of Paulie’s patches have also been embossed by imprinting shaped cutters individually into different colours of Ready to Roll Icing or by carving lines and stippling, to give him a mismatched but fun look.

So if you’re inspired by our bears and the textures trend, be sure to let us know what you’ve been making via Facebook (Renshaw Baking), Twitter (@renshawbaking) or Instagram (@renshawbaking).