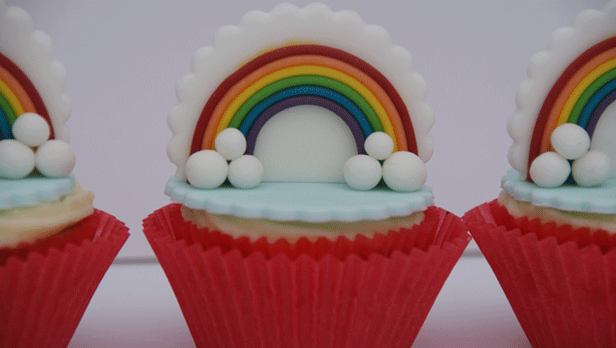 We’ve teamed up with The Pink Whisk and she shares how to make Rainbow Cupcakes and Unicorn Cake Toppers with easy, intermediate and advanced unicorn and rainbow cupcakes. It’s a chance to see all our gloriously coloured ready to roll icing in action… which cupcake are you tempted to make? Over to Ruth Clemens, of Great British Bake Off fame, to show you how…

I made these cupcakes and they were gone by teatime! I think their playful nature and whimsical colours make them an irresistable treat for anyone who spots them in the kitchen. Enjoy my step-by-step instructions for decorating your cakes.

Very easy and very quick to do. I love this because it gives the impression of a rainbow without being a traditional rainbow style.

These 3D Rainbow Cupcakes are surprisingly quick to make, but make sure you allow yourself plenty of drying time. I wanted the rainbows to stand up-right, and to be sturdy, the plaque at the back ensures the rainbows stay where they should be.

The difficult part of these cupcakes is getting the design right. Once you’ve created one though, its just a jigsaw to put together. After one, you’ll find the others come together much more quickly. Uncorns are great because they’re a mythical creature, which allows a lot of creative license.

Ruth Clemens, Baking Blogger The Pink Whisk and self confessed Manic Mummy Baker Extraordinaire. She came second in the very first series of BBC2’s The Great British Bake Off in 2010. Ruth now works with major UK brands on baking related projects, demonstrations, recipe commissions for magazines, and is the author of The Busy Girl’s Guide to Cake Decorating and The Pink Whisk Guide to Cake Making. For recipes, tutorials and inspiration see www.thepinkwhisk.co.uk