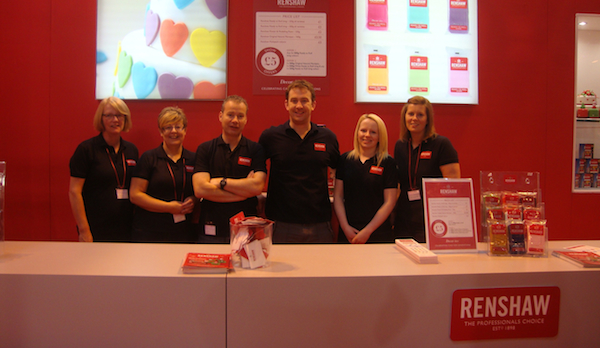 A long weekend, rolling around in fondant icing with the sugar craft crazed masses of Birmingham (and beyond) makes us here at Renshaw extremely happy. With over 23,000 attending Cake International Birmingham at the NEC, we had a fabulous time talking Christmas cake decoration, demonstrating marzipan and ready to roll icing models and occasionally taking a wander (when we weren’t too busy on the stand) checking out the competition classes on display.

Over on the Renshaw stand, taking close to our full range of coloured ready to roll icings (including our new 500g packs in Lincoln Green, Poppy Red, Jet Black and Chocolate), our Christmas Activity pack proved to be a bestseller, alongside the Neon and Naturals Activity Packs sold on renhsawbaking.com. With offers on many of our products, and samples of marzipan doing the rounds, the Renshaw stand proved quite the draw.

The Renshaw School was a real highlight of the weekend, with hundreds of people attending demonstrations and workshops with Sandra Monger, who demonstrated how to make the most adorable snow bear, and Leanne Tang, recent winner of the Baking Industry Awards Cake Decorating Business of the Year 2013 getting in the festive spirit and sharing some expert hints and tips. With eager sugar crafters gathering round to get a glimpse, expect to see more Renshaw School activity at future shows.

Our own best moment was meeting a certain celebrity baker, however, and an incredible lady called Bethan Miles. Raising money for the liver unit at Birmingham’s Queen Elizabeth Hospital, Bethan has raised over £30,000 by baking and selling cupcakes to thank the team of staff who treated her. Nic and Claire from the Renshaw team, alongside Great British Bake Off Judge Mary Berry, presented Bethan with a hamper of Renshaw goodies, as no good deed should go unrewarded.

The competition we ran with the Cake International – offering one lucky winner the chance to win a £250 voucher proved incredibly popular too, with thousands of entries over the weekend from those hoping to be rolling in sugar paste for the year to come! We’ll be contacting the winner later this week, but all in all, we had one amazing weekend, filled with seasoned professional and new cake decorators alike. Bring on next year’s round of shows!